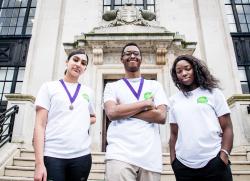 Husen Abdullahi from Samuel Rhodes School has been elected as the new Young Mayor, Muskan Khan as Deputy Young Mayor and Jessica Chukwu as the new Member for the Youth Parliament. They were elected by their fellow youth councillors on Monday 17 February 2020 and will hold office for a year.

Husen and Muskan will also be responsible for representing Islington's Youth Council at regional young mayor meetings as well as civic events and award ceremonies.

Husen, whose campaign was about tackling knife crime, said: 'I didn’t think I would win because the others all had amazing policies but I can’t wait to work with the team.'

Muskan said: 'I’m an outspoken person and I think we need an outspoken voice to take leadership and control of the issues young people face.'

Jessica, who is looking forward to this experience helping her work towards her aim of becoming an international lawyer, quoted Canadian music artist, Paul Brandt, by saying 'Don’t tell me the sky’s the limit when there are footprints on the moon'.

Cllr Kaya Comer-Schwartz, Executive Member for Children, Young People and Families said: 'I congratulate Husen, Muskan and Jessica on their elections. The mayoral positions are very important civic roles, I really hope they enjoy these honours given to them by their peers. The Youth Council represent the future of Islington. I look forward to listening to their views and working closely with them over the coming year.'

The Islington Youth Council is elected every two years but the position of Young Mayor and Deputy Young Mayor change annually to give more of the Youth Council's members the opportunity to hold office.

Youth councillors are responsible for making sure the opinions of young people in Islington are heard by campaigning for the needs and interests of their young electorate. Youth councillors also work with council officers and elected members to ensure young people have a key role in planning, designing, delivering and reviewing services.

Islington Youth Council is helping to champion fairness and equality, as two young people from Samuel Rhodes School have been elected for the first time.

A record 39 candidates stood for election this time, with voting open to all Islington young people aged between 11 and 17, who either live or go to school in the borough.

Another first, Islington’s new school, the London Screen Academy, took part in the election with one candidate standing and ballot boxes open on polling day.

It was also the third election that candidate Honey Baker has stood and been elected in. She first stood and was elected to Islington Youth Council in 2016 and was chosen to be Young Mayor in 2018. She said she was 'so happy to be elected again'.

The names of the elected candidates are:

If you want more information about the Youth Council, please feel free to get in touch.

Want to know more about your Youth Council?
The current Youth Councillors
Our Priorities
Contact us
View all services